Throughout the San Gabriel Valley, low slope or flat roof homes are common and have a wide variety of roofing styles and materials. 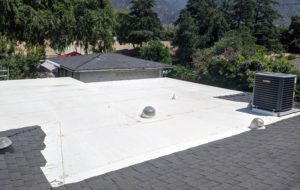 In this blog post, I use both the terms low slope roof and flat roof since that’s a common reference.

Low slope roof homes and what you need to know

This is useful for homeowners who have flatter roof homes and wonder if they should invest to form a pitch and home buyers who may wonder if low slope homes have problems.

The biggest concern and question is usually: do flat (low slope) roofs leak?

Let me say this clearly: any roof that’s well designed and properly installed won’t leak during its lifetime.

Now, let’s go on to learn about low slope roofs.

Low slope roofs then and now

Remember the days of smelly hot tar? You could tell a home was being roofed from blocks away. Low slope roofs were typically built up using layers of tar, roofing felt and they were topped with gravel. A plus is that gravel is an excellent fire retardant material.

Other low slope roof options included laying down a couple of layers of underlayment and then adhering modified bitumen, a material that’s really like an ice and water shield. The adhesive would be torched down as the material was unrolled.

Now, rubber membranes that’s like an inner tube is widely used. It reflects the sun and can last for decades. A low slope roof can truly last a younger homeowner’s lifetime.

Newer materials low slope materials include GAF’s Liberty Self-Adhering Base Ply Sheet. There are no torches or hot tar used. It’s part of a system with manufacturer guarantees lasting up to 20 years.

Commercial flat roofs now use TPO Thermoplastic Polyolefin is a single-ply roofing membrane that is one of the fastest growing commercial roofing systems on the market. TPO roofing systems are made up of a single layer of synthetics and reinforcing scrim that can be used to cover flat roofs. 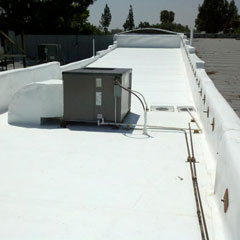 If you’ve had a leak in your low slope roof then here are some reasons why:

Tar on older roofs will eventually crack and degrade under the sun’s rays, especially on a roof where the heat is focused intensely. Rain water in the winter simply finds its way inside the crack and heads to the lowest place which is the roof decking.

After several years, moisture seeps through and your roof is visibly leaking.

The old way of correcting this would be to layer more hot tar and felt over the initial layer.

Leaks can also happen if the layers aren’t properly fastened or the decking is decaying. Water can pool in one area and back up to leak through seams or where shingles meet the flat roof portion.

On my house, the flat roof portion began leaking a couple of years after it was installed due to the drip edge not being fastened correctly. Water curled beneath the material and dripped inside the walls of my house.

Commercial low slope roofs with interior drains require extra care. Installation around ducts and HVAC units require special attention paid to flashing and bringing the material up and under or carefully around the protusions.

A summary of low slope roofing

Low slope roofs don’t have to leak. Using the right materials for commercial roofs and home mean protection for a homeowner, apartment building or commercial establishment can last for decades without worry.

Low slope roofing materials are installed with a minimal amount of labor and are also developed to reflect the sun so only a minimum amount of heat is absorbed.

Installing a low slope roof where there are existing shingles means carefully placing the material up and under the shingles so coverage is complete.

Need a roofing estimate in the San Gabriel Valley?

Commercial Roofing Products from Pasadena to Monrovia and the San Gabriel Valley
May 19, 2022

How to Choose the Best Roofing Contractor to Replace or Repair Your Roof
April 29, 2022

The Benefits of Tile Roofs and a Few Cautions
March 31, 2022

Why Checking Your Roof for Leaks in Dry Weather Matters
March 18, 2022

The Benefits of New Roof Installations and Insulation When Selling Your Home
January 27, 2022

Roofing Terms to Answer the Most Common Question Homeowners Ask About Their Roof
December 17, 2021
Recent Articles
Our Services