Do you want a solar roof to power your home’s energy usage in the San Gabriel Valley?

California now has one million solar roofs installed as noted in a celebration in December 2019. Let’s take a closer look at what’s happening with solar roofing  in the state and what solar roofs mean for homeowners in the San Gabriel Valley. 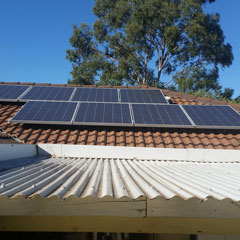 Installing a solar roof to power your home is an environmentally friendly answer to CO2 emission concerns. The milestone of one million solar roofs installed is equal to getting 4 million cars off the road in a year. That figure comes from a California Solar and Storage Association (CSSA) white paper.

Homeowners account for 970,000 of the solar roofs installed while commercial buildings, farms and government offices have accounted for 30,000.

Solar costs have decreased and almost 7% of Californians now have a solar roof.

Momentum has built, too, as residential solar roofs in the Golden State are being installed at about one percent per year.

A solar roof is a system of panels or modules that collects energy from the sun, converts it to power for a home or office building and then uses excess energy to supply a grid.

Garvey Roofing will handle the paperwork for customers who want a solar roof installed.

Batteries are the next milestone to reach. Quality batteries will store the solar power collected during the day so the home has full energy use at night.

Solar costs have come down so more homeowners can take advantage of the affordability. About 50% of installed roofs are in neighborhoods where the median income is around $70,000 per year or less, according to the CSSA.

Solar roofs are becoming more attractive. You’ve seen installation in the early days when a large panel in a metal frame was installed for the whole neighborhood to see. Now, solar tiles are coming in a variety of styles.

Tesla is the large brand name in solar roofing tiles. Tesla founder Elon Musk said in an interview that the tiles are made of quartz. Tesla’s solar roof website calls it “tempered glass” and says their roofing system is made up of solar and non-solar tiles for a traditional roofing appearance with clean lines.

The tiles are “three times stronger than standard roofing tiles.”

Solar roofs are great, but asphalt shingles and traditional tile roofing systems are also energy efficient and are manufactured in a way that’s environmentally friendly.

We stay up to date on all roofing technologies, including low-slope lifetime materials, solar, all makes of tile and the best roofing materials and shingles on the market.

Here’s a helpful article: California Tug-of-War over Solar Future: Roofs or Outposts. At question is if the state will try to generate its renewable energy from rooftops or from large solar farms in the desert.

While large=scale solar systems are still developing and emerging one thing is certain—solar roofs will continue growing in popularity.

Call for a free estimate and we can let you know if a solar roof is best for your home based on your energy usage, its location and your goals as a homeowner.

Commercial Roofing Products from Pasadena to Monrovia and the San Gabriel Valley
May 19, 2022

How to Choose the Best Roofing Contractor to Replace or Repair Your Roof
April 29, 2022

The Benefits of Tile Roofs and a Few Cautions
March 31, 2022

Why Checking Your Roof for Leaks in Dry Weather Matters
March 18, 2022

The Benefits of New Roof Installations and Insulation When Selling Your Home
January 27, 2022

Roofing Terms to Answer the Most Common Question Homeowners Ask About Their Roof
December 17, 2021
Recent Articles
Our Services